The simplicity of the set emphasizes the two fundamental elements of this piece : the music, magnetically omnipresent, emerging live from Raphaëlle LATINI’s turntables, and the tormented, contorted body of Samuel LEFEUVRE.

Industrial, metallic and repetitive sounds fill a space bathed in a fading light, driving through moments of total darkness. Gradually we begin to see a white-clad body, trying valiantly to pull itself away from the ground. The dancer straightens up— imperceptibly, awkwardly — as though bombarded by electric waves, a somewhat dysfunctional robot.

The frail verticality the dancer achieves becomes a symbol of resilience, the incarnate image of that which drives humans and makes them stand up again and again, until the end.
(excerpt from the program of JUNE EVENTS Festival, Paris) 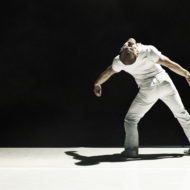 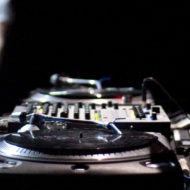 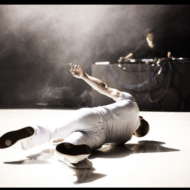