Five performers appear on stage, with rolls of brown kraft paper. From the long strips of paper that they unfold, fold, crumple, twist and tie will emerge a human-like effigy, a paper figure, slightly taller than the four comedians who manipulate it in full view of the audience. The dancer and the puppet embark on an unusual pas de deux, which concretely tests on stage the question asked by Kleist in his famous philosophical short essay “On the Marionette Theatre”: which of the marionnettic body or the living human body is the most gracious?
In Krafff, each turns out to have its own advantages and its own limits, examined and revealed according to the movement possibilities explored (weightlessness, gravity, suppleness, tonicity, rotation, torsion…). Here duet, there duel, this choreographic score actually involves a triple listening and writing of the body: that of the flesh and blood body, that of the paper dancer, and that of the four bodies dedicated to this unique body, giving shape and rhythmic impulse to its movements.

Coproduction Théâtre de Romette, La Comédie de Clermont-Ferrand – Scene Nationale, Compagnie Contrepoint.
With the support of CND en Rhône-Alpes and of CCN de Rillieux-la-Pape – Appearance on the programme of the Avignon Festival achieved with the help of le Transfo, cultural agency of the Auvergne region. 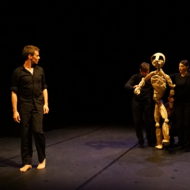 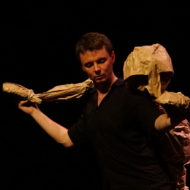 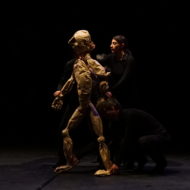 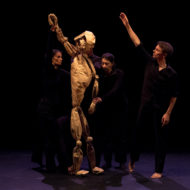