“Keeping memories alive – that is his artistic subject; connecting them with the present – that is his objective. Hoghe, who does not reach into the past without joining it to the present, developed a structure of works that correlates with a thought process that oscillates between the private and representative. He consistently contrasts personal memory with a contemporary context, and the texts he speaks on stage as well as the music he plays invoke the fields of reference and cultural memory that we all take part in. Remembering is a competence. Thanks to that, something new is created, doors are opened and our view expands.”
(Katja Schneider: Sich verhüllen, um etwas zeigen zu können. In: Schreiben mit Körpern. Der Choreograph Raimund Hoghe, hrsg. v. Katja Schneider und Thomas Betz, 2012).

In his new production, “Quartet”, Raimund Hoghe is continuing the work as a choreographer and dancer that he began in Dusseldorf over twenty years ago and has since been celebrated throughout the world. After his solo “An Evening with Judy”, he is now working with four of his favorite dancers in “Quartet”: Ornella Balestra, Marion Ballester, Emmanuel Eggermont and Takashi Ueno. An additional Japanese dancer, Yuta Ishikawa, will be a new addition. And Hoghe as well as his artistic associate Luca Giacomo Schulte will also be back on stage again.

The biographies and personalities of the dancers from Japan, France, Italy and Germany are the focus of the work – in addition to an approach to music from different periods and countries. String quartets by Franz Schubert and Luigi Boccherini play a special role here, combined with Italian canzone, Japanese hits and songs from American musicals. Thus this “Quartet” will also be a journey through different times and cultures, present people’s differences and commonalities, speak about death and celebrate life. 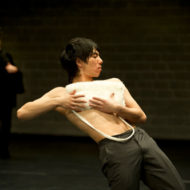 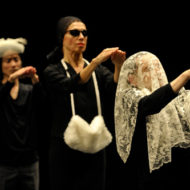 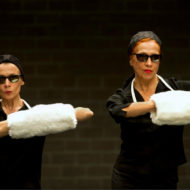 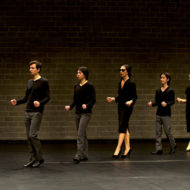